Autism is a complex neurobehavioral disorder that includes impairments in social interaction and developmental language and communication skills combined with rigid, repetitive behaviours. The disorder covers a large spectrum of symptoms, skills, and levels of impairment. It ranges in severity from a handicap that somewhat limits an otherwise normal life to a devastating disability that may require institutional care.

Children with autism have trouble communicating. They have trouble understanding what other people think and feel. This makes it very hard for them to express themselves either with words or through gestures, facial expressions, and touch.

A child with autism who is very sensitive may be greatly troubled — sometimes even pained — by sounds, touches, smells, or sights that seem normal to others.

Children who are autistic may have repetitive, stereotyped body movements such as rocking, pacing, or hand flapping. They may have unusual responses to people, attachments to objects, resistance to change in their routines, or aggressive or self-injurious behaviour. At times they may seem not to notice people, objects, or activities in their surroundings. Some children with autism may also develop seizures. And in some cases, those seizures may not occur until adolescence.

Some people with autism are cognitively impaired to a degree. In contrast to more typical cognitive impairment, which is characterized by relatively even delays in all areas of development, people with autism show uneven skill development. They may have problems in certain areas, especially the ability to communicate and relate to others. But they may have unusually developed skills in other areas, such as drawing, creating music, solving math problems, or memorizing facts. For this reason, they may test higher — perhaps even in the average or above-average range — on nonverbal intelligence tests.

Symptoms of autism typically appears during the first three years of life. Some children show signs from birth. Others seem to develop normally at first, only to slip suddenly into symptoms when they are 18 to 36 months old. However, it is now recognized that some individuals may not show symptoms of a communication disorder until demands of the environment exceed their capabilities. Autism is four times more common in boys than in girls. It knows no racial, ethnic, or social boundaries. Family income, lifestyle, or educational levels do not affect a child’s chance of being autistic.

• Very little or no eye contact.
• Resistance to being held or touched.
• Tends to get too close when speaking to someone (lack of personal space).
• Responds to social interactions, but does not initiate them.
• Does not generally share observations or experiences with others.
• Difficulty understanding jokes, figures of speech or sarcasm.
• Difficulty reading facial expressions and body language.
• Difficulty understanding the rules of conversation.
• Difficulty understanding group interactions.
• Aversion to answering questions about themselves.
• Gives spontaneous comments which seem to have no connection to the current conversation.
• Makes honest, but inappropriate observations.
• Seems unable to understand another’s feelings.
• Prefers to be alone, aloof or overly-friendly.
• Difficulty maintaining friendships.
• Finds it easier to socialize with people that are older or younger, rather than peers of their own age.
• Unaware of/disinterested in what is going on around them.
• Talks excessively about one or two topics (dinosaurs, movies, etc.).
• Overly trusting or unable to read the motives behinds peoples’ actions.
• Minimal acknowledgement of others.

Abnormal use of pitch, intonation, rhythm or stress while speaking.
• Speech is abnormally loud or quiet.
• Difficulty whispering.
• Repeats last words or phrases several times. Makes verbal sounds while listening (echolalia).
• Often uses short, incomplete sentences.
• Pronouns are often inappropriately used.
• May have a very high vocabulary.
• Uses a person’s name excessively when speaking to them (“Mary, we are having lunch. Right, Mary?”).
• Speech started very early and then stopped for a period of time.
• Difficulty understanding directional terms (front, back, before, after).

Obsessions with objects, ideas or desires.
• Ritualistic or compulsive behaviour patterns (sniffing, licking, watching objects fall, flapping arms, spinning, rocking, humming, tapping, sucking, rubbing clothes).
• Fascination with rotation.
• Play is often repetitive.
• Many and varied collections.
• Unusual attachment to objects.
• Quotes movies or video games.
• Difficulty transferring skills from one area to another.
• Perfectionism in certain areas.
• Frustration is expressed in unusual ways.
• Feels the need to fix or rearrange things.
• Transitioning from one activity to another is difficult.
• Difficulty attending to some tasks.
• Gross motor skills are developmentally behind peers (riding a bike, skating, running).
• Fine motor skills are developmentally behind peers (hand writing, tying shoes, scissors).
• Inability to perceive potentially dangerous situations.
• Extreme fear (phobia) for no apparent reason.
• Verbal outbursts.
• Unexpected movements (running out into the street).
• Difficulty sensing time (Knowing how long ten minutes is or three days or a week).
• Difficulty waiting for their turn (such as in a line).
• Causes injury to self (biting, banging head).

What Service Dogs Can Do For Autism

In addition, there are three major ways a service dog can help, especially with children:

• To help prevent the child from wandering or running away.

• To help with self-soothing during melt-downs. The tactile stimulation, whether by petting, hugging, or having the dog actually lie on the child, can help the child learn the skills of calming themselves.

• Socialization (including serving as a “social bridge”, so as children and adults come over and ask about the dog, the child with autism is prompted to answer. The parent should not answer questions, but should refer all inquiries to the child. Thus with the dog, rather than having just the parent or teacher try to bring the child out of their own world, the entire community is talking to the child.)

A long-term study of service dogs and children with autism reported:

• “Highly significant increase in pro-social behaviour with a parallel decrease in self-absorption.”
• “Fewer autistic behaviours – examples include clicking noises, repetitive spinning or jumping or hand-posturing (stimming), and bolting or roaming.”
• “More socially-appropriate behaviours (such as reaching up for hugs, frequently imitating the therapist’s actions, joining or initiating games).” 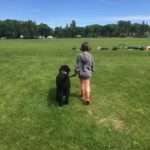 This is exactly what OUR daughter needed and I am so happy to see them together it often brings happy tears to my eyes. A service dog may not be the right option for everybody but it was the missing piece of our puzzle. He has completed our family. 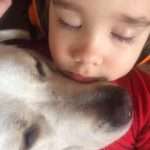 Tupper sleeps, is learning to self-regulate with Lego’s help and we can go shopping and for walks without having to strap Tupper into a stroller the whole time.